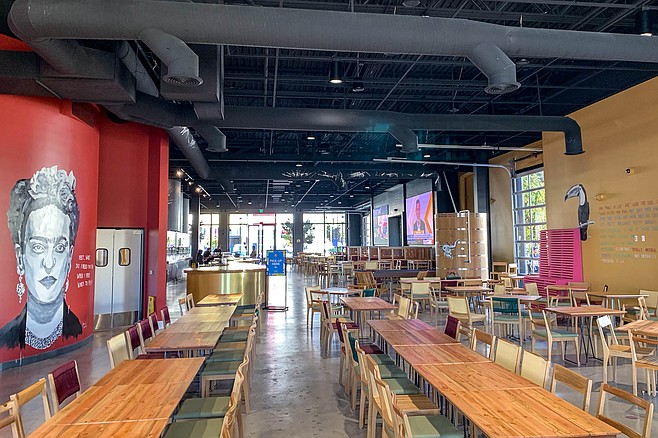 Already the county’s southeasternmost brewery, Novo Brazil Brewing has opened a second location somehow even farther southeast. And it’s not small. The roughly 14-thousand-square-foot brewery and restaurant occupies a corner spot at the upscale Otay Ranch Town Center, standing as an outpost of San Diego beer amid such retailers as Apple Store, AMC Theaters, and Barnes & Noble, and taking over a storefront that used to be an Anthropologie.

It immediately has become a local beer hub for east Chula Vista. While more than a quarter million people call the city home, most of its breweries are clustered near its downtown area, closer to the bayfront. For the tens of thousands who reside in its vast expanses east of the 15 freeway, Novo Brazil has been the only brewery to establish a physical presence.

Since launching in 2015, it has gradually packed its warehouse space in Eastlake with a brewhouse, tasting room, canning line, and quality assurance lab. While the property has done well to help the brand grow into a multi-state distributor, as a local retail presence, it’s been hampered by its industrial location. Novo’s new location is not just a craft beer tasting room, it’s a community facing restaurant with a small batch brewhouse on premise.

“Here, it’s a more family-friendly environment,” says CEO Tiago Carneiro, who founded the business with his father and brother. The family hails from the Brazilian town of Belo Horizante, which, like Chula Vista, loosely translates to “beautiful view.”

Setting up shop within an outdoor mall gives the brand instant visibility to a population unreached by most craft beer entities. Supporting its efforts are 17-foot diagonal televisions, shuffleboard tables, room for live music, and a more than 900-person capacity. There’s a full kitchen serving a fusion of Brazilian, Mexican, and American cuisines, and at the rear of the dog-friendly space, a play area is being built for children.

Of course, beverages are the main draw. Behind a seemingly never-ending length of wavy bartop, the brewpub will offer up to 40 taps of Novo Brazil beer, much of it brewed in small batches, within stainless steel tanks and oak foudres near the back of the restaurant. “This will be our house of innovation,” says Carneiro, “We’re planning to release hundreds of recipes here. We don’t even know if we’ll do the same recipe here [twice].”

Along with fresh beers, including a consistent output of hazy IPAs and a low-calorie ale measuring under 100 calories per 12 ounces, the brewers here will experiment with kettle sours, wild ales, and other styles with organic ingredient infusions. And it’s not all beer: the remainder of its 60 tap handles will pour hard kombucha, soft kombucha, hard seltzer, and wine. That soft kombucha is made by K Happy Kombucha, Brazil’s largest kombucha producer, which happens to be owned by the Carneiro family. In fact, of all the aforementioned drinks, only the wine isn’t a part of their beverage empire.

Novo Brazil has expanded to the point it’s not just a beer company anymore. “We want to be fermentation company,” says Carneiro, “Anything that we can ferment, we’ll try it.” Last year, it became one of the first local breweries to add hard kombucha to its offerings. Building on a white tea base, it’s now up to seven different canned flavors of Nova Easy Kombucha, including combinations such as mango ginger and lavender hibiscus. It will further expand its product line this month with a new line of hard seltzers.