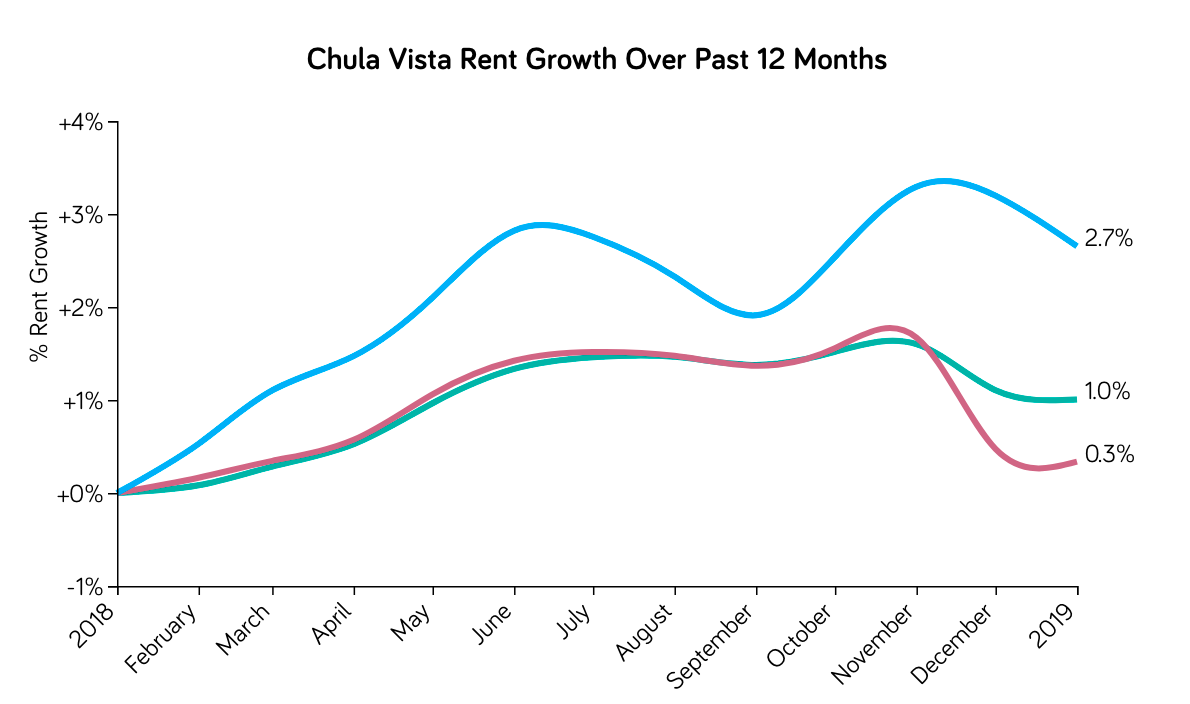 Welcome to the February 2019 Chula Vista Rent Report. Chula Vista rents declined over the past month. In this report, we’ll evaluate trends in the Chula Vista rental market, including comparisons to cities throughout the metro, state, and nation.

Chula Vista rents declined significantly over the past month

Chula Vista rents have declined 0.5% over the past month, but are up moderately by 2.7% in comparison to the same time last year. Currently, median rents in Chula Vista stand at $1,640 for a one-bedroom apartment and $2,130 for a two-bedroom. This is the second straight month that the city has seen rent decreases after an increase in November of last year. Chula Vista’s year-over-year rent growth leads the state average of 0.3%, as well as the national average of 1.0%.

Throughout the past year, rent increases have been occurring not just in the city of Chula Vista, but across the entire metro. Of the largest 10 cities that we have data for in the San Diego metro, 7 of them have seen prices rise. Here’s a look at how rents compare across some of the largest cities in the metro.

As rents have increased moderately in Chula Vista, a few large cities nationwide have also seen rents grow modestly. Compared to most large cities across the country, Chula Vista is less affordable for renters.

Data from private listing sites, including our own, tends to skew toward luxury apartments, which introduces sample bias when estimates are calculated directly from these listings. To address these limitations, we’ve recently made major updates to our methodology, which we believe have greatly improved the accuracy and reliability of our estimates.

Apartment List is committed to making our rent estimates the best and most accurate available. To do this, we start with reliable median rent statistics from the Census Bureau, then extrapolate them forward to the current month using a growth rate calculated from our listing data. In doing so, we use a same-unit analysis similar to Case-Shiller’s approach, comparing only units that are available across both time periods to provide an accurate picture of rent growth in cities across the country.

Our approach corrects for the sample bias inherent in other private sources, producing results that are much closer to statistics published by the Census Bureau and HUD. Our methodology also allows us to construct a picture of rent growth over an extended period of time, with estimates that are updated each month.

Apartment List publishes monthly reports on rental trends for hundreds of cities across the U.S. We intend these reports to be a source of reliable information that help renters and policymakers make sound decisions, and we invest significant time and effort in gathering and analyzing rent data. Our work is covered regularly by journalists across the country.

We are continuously working to improve our methodology and data, with the goal of providing renters with the information that they need to make the best decisions.