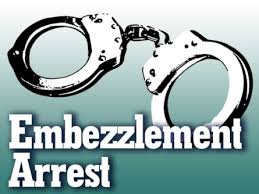 Danya Margarita Williams, 42, was arrested on allegations she stole more than $50,000 in money orders between June 2016 and November 2017.

Williams is accused of taking money orders submitted as part of the district’s fingerprint background investigations and depositing them into her personal bank account, police said.

After the theft was reported by district officials in late 2017, investigators with the Chula Vista Police Department looked into the case.

They claim the money orders ranging from $52 to $75 per applicant were missing.

They then obtained a warrant for Williams’ arrest and took her into custody on Tuesday, booking her the Las Colinas Detention Facility.

She bailed out of jail and is scheduled to return to court on March 12, according to the San Diego County District Attorney’s Office.

Williams was employed by the district from Oct. 2001 to Feb. 2018, when she resigned in light of the district’s concerns with her practices, district spokesperson Manny Rubio said.

She worked in the Human Resources department and was often the person who fielded applicants for jobs within the district, Rubio confirmed.

Rubio said in light of the allegations against Williams, the school district updated their internal processes, checks and controls.

The arrest is more bad news for a district facing job cuts and a multi-million dollar budget shortfall.

District officials also issued early retirement offers to teachers in an attempt to deal with a budget shortfall that would put the district $30 million in debt by the end of the 2018 – 2019 school year.