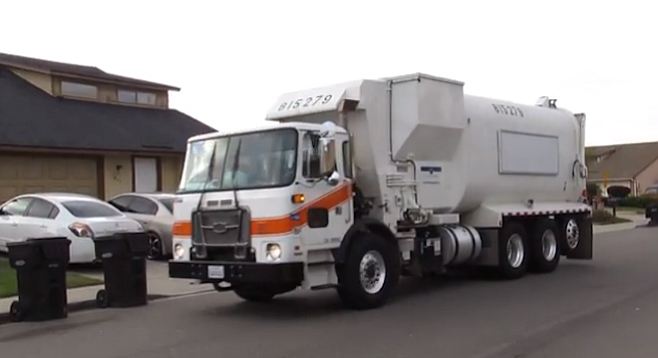 The city of San Diego is threatening to take action against the trash collection company Republic Services, whose workers went on strike two weeks ago over stalled contract negotiations.

The company does trash pick-ups in Chula Vista, Clairemont, Bonita, Eastlake and other parts of San Diego County, but those services halted when more than 250 waste collection workers went on strike before the holidays. Waste in those areas has been piling up in bags at curb sides and alleyways, compounded by the leftovers of holiday packages and celebrations.

In a letter sent Thursday to the company, the city’s Environmental Services Division pointed to the firm’s failure to collect trash according to its contract since the labor talks fell apart on Dec. 17, and sought “information regarding your plan to immediately redress these issues regarding your failure to perform.”

“Labor unrest, as defined in the Agreement, is not an excuse for non-performance,” the letter says.

The letter states that Republic Services is obligated to provide “reliable, courteous and high-quality collection and/or diversion services at all times,” which includes collecting waste from all customers at least once per week, but says the company has not met those conditions.

If it doesn’t resume service soon, the city will “consider pursuing all available remedies under the franchise agreement,” the letter stated.

The city said Republic must respond by Monday with a written plan on how the company intends to remedy the trash overflow. The company could be subject to fines or worse if it doesn’t catch up on its contract requirements, City Chief Operating Officer Jay Goldstone said in an email.