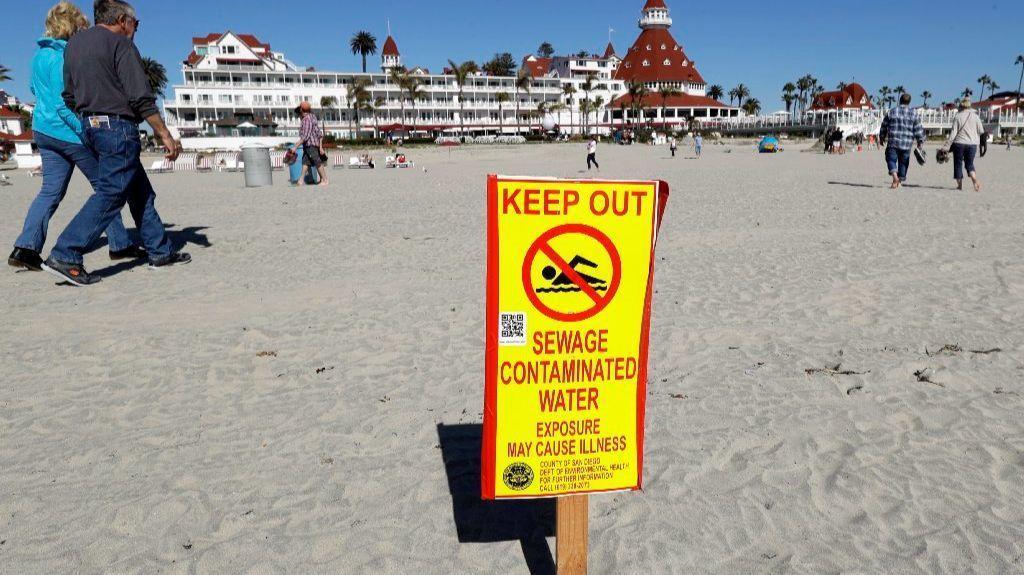 A sewage pipe break south of the border is dumping raw sewage into the Tijuana River Valley then out to the Pacific Ocean where it travels north to US shores. These shores include Chula Vista ocean facing lands. What’s funny about this article is, it’s old news. The spill, only just reported, started on Dec 7th.

The International Boundary and Water Commission (IBWC) alerted the US to the break in the pipe only recently, like Tuesday the 12th of December! The pipe broke Dec. 7! Thanks ass hats. I hope all my friends that surf those waters have up-to-date hepatitis vaccinations.  Imperial Beach Mayor Serge Dedina is not happy.

IBWC officials said Wednesday, “CESPT (Tijuana Water Utility) has informed us through the Mexican Section that a rupture was discovered yesterday on the Colector Poniente in Southeast Tijuana. This rupture caused the soil above the pipe to collapse in an auto junkyard. Several sinkholes were discovered yesterday by the workers at the property and notified CESPT who then diverted the flows upstream to a stormwater collector which drains to the Tijuana River. “

The IBWC estimated the flow of sewage into the Tijuana River to be at 300 liters per second, or approximately 7 millions gallons per day.

In a press conference Tuesday, Dedina renewed calls against the IBWC for “failure” to stop sewage from making its way into the river valley and eventually, the Pacific Ocean along Imperial Beach.

“There’s one major reason that these massive sewage spills continue to happen: The International Boundary Water Commission is refusing to obey the United States’ clean water protection laws and failing in its responsibility to protect the Tijuana River, the Pacific Ocean, our beaches, and our community. The IBWC has informed us that this latest spill is dumping ‘between 6-7 million gallons per day into the Tijuana River.’ This is ridiculous and it’s threatening the health, safety, and economy of Imperial Beach and surrounding communities. While I have demanded an investigation into this latest spill, that alone is not enough. Our residents and businesses are literally sick and tired of being notified by the IBWC of yet another massive spill, waiting for an after-the-fact review, and then seeing nothing change. Already in 2018, tens of millions of gallons of untreated sewage have poured through our community, and the IBWC is doing nothing to stop it.”

Dedina said later Tuesday that 12 miles of coastline were closed because of the sewage leak.

An IBWC official said an engineer was currently assessing the damage to the pipe, but could not offer more specifics.